She’s tall and elegant with fairest face
her history dates back before these times.
She changes through all ages yet remains
mellifluous, mysterious, and fine.

She’s herald for the royals who played at war,
a gift to salve an aching mother’s heart,
a tribute from the poor when laid in prayer
a pledge of truth and troth when lovers part.

I give to you this sign of family,
a symbol of your beauty in repose.
Its lines are drawn on all you sanctify–
on vases, jewelry, furnishings and clothes.

Great love has left its imprint to disclose
and mark you as a Woman of the Rose.

Y’all may have to read this with my Texas accent. Royals and prayer should be read as a one syllable word, and jewelry as two to be “impure” iambic pentameter.  Well, that’s how I pronounce them, ok? This was written for my granddaughter Valerie’s 17th birthday. She speaks Florida, but she should understand this pretty well.

It’s being posted for Björn’s MTB article on Voltas. A Volta typically happens on line 9 of a sonnet and means a turn from the original statement of the poem.  It’s where the poem “heads home”. Here I change from the history of the rose to giving it symbolically to my granddaughter. 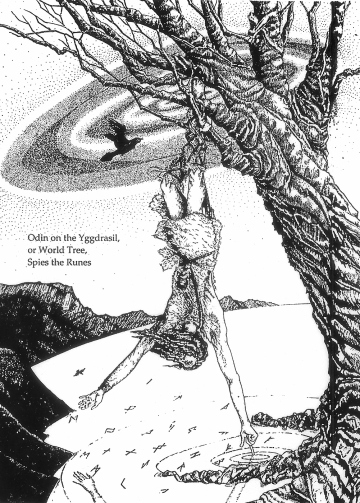 His Quest to master Ecstasy
and gain Valhalla’s apogee
drove Odin’s cryptic sacrifice
by hanging on the famed world tree.

He spent nine days near his demise
so he could glean the runes, grow wise.
The words revealed life’s paradox —
a man reborn can conquer vice.

Without an act, thought opens locks;
by changing view, new fortune knocks.
While being still, a path appears
and tosses loss upon the rocks.

His mind had shed his former fears
by seeing life in sets of tiers
to know all life is joined, adheres
to other life as earth to spheres.

And then
you let it flow.
It’s easy-like, just think!
You write your gut, what aches down deep,
take off the chains of form, of rhyme, of beat–
write free! Get rid of rules that tell
you what to say in rhyme,
that orders feet.
Ascend!

Immerse
yourself in form;
let rhyme yield memories.
Compose set-time to bring to life
the musicality of images.
Experience the thrill of sounds
that rush the wind with fire
of metaphors
and verse.

Throw out
ideas of form,
the last resort of those
who have no passion of their own —
those youth who haven’t lived or aged shades
still hanging on to dreams of art.
It’s time to break the rules.
Authenticate
with clout!

So bored
with this drum roll!
These cries of lazy minds
that choose to vomit words, then serve
up prose disguised as ugly poetry,
refuse to learn their craft, refine
their lines,  deride the skilled
with angry, strong
discord.

To praise
ideals in form,
hide –bound to metered rhyme
obscures reality. The scars
of life, the wars of hurt, the private angst
that teaches strength, that burns the soul
inflames our minds — become
the howl, the source
of rage.

To smooth
the furrows out,
reduce to essences,
extract the purest feelings with
the finest words that spring from ironies,
analogies in praise, despair
or passion’s depths. The goal’s
to sing  and plumb
for truth.

© Gay Reiser Cannon * 9.24.14 * All Rights Reserved
Both sides written in the © Quarrel Form (or Falling Diamonds) that I invented and am using as a challenge at dVerse Poets Pub for Meeting the Bar. The form begins and ends with 1 foot iambic. The subsequent lines increase by one foot iamb to whatever desired length of  iambic feet probably not exceeding eight and then decrease by one to a one foot iamb for the end. The only rhymes must be in beginning and end lines.

Balanchine, Russian as the Ballet Russe,
defected with friends yearning for Paris
where Stravinsky and his Firebird seduced
him to choreograph for the genius
Diaghilev. There he joined the restless
musicians, artists, composers who whirled
through the bars, and cafes of Montparnasse–
each one returning to a private world.

Fauré a gentleman who’d paid his dues
read Villon, taught Ravel, and sought justice
for the avant-garde’s dance with modern muse.
Influenced Stravinsky, Ravel, for less
fame and fortune perhaps, yet still he stressed
elegance and composed while he unfurled
a truce between new wave and staid ensconced–
each one returning to a private world.

With “Ballade” Balanchine would introduce
Fauré through his acclaimed Ballade Opus
Nineteen in a series of pas de deux.
Ballerina and Cavalier express
through their fleeting encounters love’s distress,
exquisitely wound in figures that twirled
en pointe, en dehors or through pirouettes–
each one returning to a private world.

Formal and modern merge and coalesce;
in a surreal attitude shapes swirled
New York and Paris in artistic dress–
each one returning to a private world.

I don’t usually talk about or try to explain my poems. I think you should be able to take them at their face value, serious or silly, plain or incomprehensible, pretty or poignant — it’s yours as you read it to decide. But considering I wrote the articles, I needed one ballade to do the work of two. So I’m breaking my own rules.

This French Ballade, I think, ideally represents the point where the classic merges with the modern as it did in Paris in the early 20th century. In that period the painter who was on this cusp was Cezanne, the composer was Fauré, the maestro/impresario was Diaghelev, the dancer was Nijinsky. After them it was all modern. As I stated in Luminous Cows, taking the cow as a symbol was a point of change from the bucolic to something lit from within by the truly modern artists. Likewise the ballade which started as a dance, then turned into a poetry form, became a serious subject with the compositions of Chopin only to be “modernized” by Fauré. And through Balanchine who had come late to the Ballet Russe, who knew Fauré, who left Paris for New York, was funded, and initiated serious dance in the US, we have a choreographer who reassembled the Ballade in a completely modern way as dance again. Like mirrors reflecting mirrors reflecting mirrors, the French Ballade changes to something different in the hands of modern artists.

I felt as though my poem too, was on the cusp – both old in its form and its relation to the dance, but new in the way it feels like free verse, the rhymes somewhat slanted, the history almost prosaic. Yet it rhymes, it conforms to syllabic count and the refrain describes the actions of Balanchine’s Ballade. I hope you like it.